Home | All Products
All Categories

Abstract: The abnormal operation of a servo valve from a single 300 MW unit in a power plant in Henan Province from January 3rd to March 13th, 2008 caused frequent uncommanded self-closing and self-opening during the operation of the high and medium pressure regulating valve. The monthly abnormal movements up to 48 times, seriously affecting the unit's safe operation.

I. Influencing factors of abnormal servo valve operation The main features of abnormal operation of the servo valve of the unit are: no control system command is given for each abnormal action, abnormal actions are abruptly fast closing or slow closing, and normal return to normal after abnormal operation, and When the valve is opened and recovered, the action is faster; when the EH oil pressure is stable or fluctuate, abnormal actions have occurred. The valve closing and opening curves are continuous and smooth, without local delay increase and pause. Part of the replacement of the servo valve factory inspection and maintenance, no corrosion, damage. The servo valve replaced by the unit is installed in the DEH of other units and no abnormality occurs.

In order to find out the reasons and seek solutions, we have conducted a comprehensive analysis of the factors that may affect the abnormal operation of the servo valve.

The unit operates with only one valve at a time during abnormal operation, so it is possible to eliminate the possibility of problems with the main power supply and the main switch; due to abnormal operation of the unit, it is sometimes faster (2~3s) and sometimes slower (40s~7min). When the solenoid valve loses power instantly, it is equivalent to protection action. The valve closing speed should be very fast (<0.45), so the possibility of the solenoid valve losing power instantaneously is also very small. At the same time, the power plant checks the main switch (insurance) and sub-switch (insurance) and confirms normal. Therefore, the fault is caused by non-DC power supply.

1.3EH hydraulic pressure fluctuations can be seen from the data unit recorded DCS stability constant unit load in normal operation, no operation of the valves, EH oil supply system is not an instantaneous large, EH hydraulic sometimes stable, sometimes frequent fluctuations, the maximum The fluctuation range is 10.6 to 13.2 MPa. When the EH oil pressure is stable and fluctuates, an abnormal servo valve operation occurs. Therefore, there is no direct correlation between the oil pressure fluctuation and the abnormal operation.

1.4 Anti-Fuel Oil (1) Foam Characteristics When the properties of the anti-foam foam are exceeded, more foam may appear in the oil, affecting the stability of the oil pressure, causing fluctuations in the oil pressure and causing the control system to oscillate. The swing is characterized by continuous uninterrupted. When the valve of the unit is abnormally operated, each valve is abnormally closed and opened, and no swinging phenomenon occurs. Therefore, the abnormal action of the valve due to the over-standard anti-fuel foam characteristics can be excluded. After verification, the anti-fuel foam characteristics of the unit did not exceed the standard.

(2) Resistivity and acid value The unit's anti-fuel oil acid value and resistivity exceeded the standard and the water content was high, indicating that the oil product was contaminated and the oil quality deteriorated (Table 1). Deterioration of oil quality will lead to increased sludge, causing excessive particulate matter.

(3) Particulate matter is the most hazardous contaminant in the hydraulic system. It not only accelerates the wear of the hydraulic components, but also blocks the gaps and orifices of the components, causing malfunction of the control components, causing system failures and even forced shutdown. According to statistics, the failure of the hydraulic system caused by solid pollutants accounts for 60% to 70% of the total pollution faults. The particles in the anti-combustion oil, especially the large particles, will cause the servo valve oil supply line to be blocked, resulting in unstable oil pressure and abnormal operation of the servo valve. Its characteristic is irregular and discontinuous. Particulates in the oil can come from outside dust contamination, and can also come from the system's corrosion products or oil sludge formed by deterioration of oil quality. The relationship between the abnormal movement of the servo valve and the fuel-resistant particle size is shown in Table 2.

As can be seen from Table 2, the test results of the anti-burning oil granularity from January to June of 2008 were all unsatisfactory, and the highest level reached Level II (NAS1638, the same below), and the corresponding servo valve was also higher in the frequency during this period. Due to the large number of units in the plant, the number of external oil filter units is limited, and the daily oil filtering method is to put the anti-fuel system bypass regeneration device into operation. The external oil filter will be connected to the system from time to time to filter oil. In July, the power plant adopted enhanced external filtering. Oil filter oil, particle size test results improved, on July 2, 8 and 21 test results for the 8th, 6th and 5th, and the servo valve during this period of frequency of transfusion is also greatly reduced. At the end of July, through the cleanup of the oil system, as well as the filtration and regeneration processes, the particle sizes on the 6th and 14th of August were all in Level 2 and the servo valve did not change during this period. Track the servo valve movements from September to November, once a month. Therefore, there is a significant correlation between the service frequency of the servo valve and the anti-burning oil granularity level.

Based on the above analysis, it is believed that the excessive resistance of fuel oil particles is the direct cause of abnormal operation of the servo valve.

II. Sources of particulates and their effects In April 2008, the overhaul of the anti-fuel oil system of the unit found that the bag-type diatomaceous earth reclaimed filter material of the on-line bypass regeneration purification device leaked, and was shut down from April 7 to April 16. The unit anti-fuel regeneration device will replace the filter cartridge with another type of diatomaceous earth filter. On July 23, 2008, the unit's anti-fuel system was overhauled and found that the oil surface floated flocculent sludge. There were many yellowish gel-like sludge deposits on the inner wall of the fuel tank. The sludge thickness was about 5mm. Sampling analysis of the sludge, the test results are shown in Table 3 and Table 4. 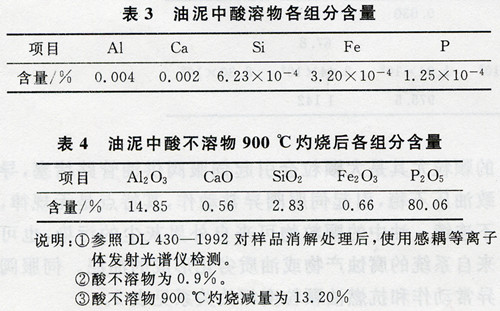 The diatomaceous earth in the ordinary diatomaceous earth filter is calcined from the clay, and its composition and active ingredients are various and unstable, and contain a large amount of free metal ions. The unit anti-fuel oil bag diatomite filter material leakage occurred, according to the test results can be judged sludge A1, Ca, Si mainly from diatomaceous earth filter material. The higher moisture content in the oil, the acidity of the oil, and the presence of metal ions accelerate the decomposition of the fuel. Resistant oil-resistant oil impurities and degradation products of a chemical reaction occurs to generate, diatomaceous earth and small particles dispersed oil degradation products and a combination of both attached to the system control tank, pipe or the inner wall of the filter screen protection i.e., the formation of sludge .

Use the shutdown maintenance opportunity to remove the anti-fuel oil from the oil tank for the external filter oil filter, thoroughly clean the main tank and flush the oil pipeline. After the start-up of the unit, adopt continuous oil filtration and other measures to make the fuel oil resistant to particle size and acid value. , Resistivity and other indicators to pass. Excluding the factors causing the abnormal operation of the servo valve, the frequency of the unit load swing caused by the abnormal operation of the servo valve is greatly reduced until it disappears.